A YA Historical Fiction novel published by Little, Brown Books for young readers on April 7th, 2020

Germany, 1945. The soldiers who liberated the Gross-Rosen concentration camp said the war was over, but nothing feels over to eighteen-year-old Zofia Lederman. Her body has barely begun to heal; her mind feels broken. And her life is completely shattered: Three years ago, she and her younger brother, Abek, were the only members of their family to be sent to the right, away from the gas chambers of Auschwitz-Birkenau. Everyone else–her parents, her grandmother, radiant Aunt Maja–they went left. Zofia’s last words to her brother were a promise: Abek to Zofia, A to Z. When I find you again, we will fill our alphabet. Now her journey to fulfill that vow takes her through Poland and Germany, and into a displaced persons camp where everyone she meets is trying to piece together a future from a painful past: Miriam, desperately searching for the twin she was separated from after they survived medical experimentation. Breine, a former heiress, who now longs only for a simple wedding with her new fiancé. And Josef, who guards his past behind a wall of secrets, and is beautiful and strange and magnetic all at once. But the deeper Zofia digs, the more impossible her search seems. How can she find one boy in a sea of the missing? In the rubble of a broken continent, Zofia must delve into a mystery whose answers could break her–or help her rebuild her world.

They Went Left was a study in opposites: the despair of war and the hopefulness when it’s over, the love and hatred for oneself as well as for family and those survivors. It was was heavy stuff.

Taking place during, right before and immediately after the Holocaust, They Went Left is a story about a young Jewish Polish woman named Zofia Lederman trying to reconstruct her family and her world after leaving the famed concentration camps: Auschwitz-Birkenau and Gross-Rosen. The story gets harsh. It gets graphic. It gets terrible.

But it also gets beautiful. It gets hopeful. It goes forward.

The Holocaust is an event that is terrifyingly hard to write and read about. So many atrocities and crimes and unnecessary death all because of prejudice. The torture and unimaginable things that actually, factually occurred to so many children, women and men fill up an entire building in Washington, D.C. But that’s still not enough.

They Went Left, while being fictional, was supremely accurate in it’s details of the camps, both the concentration and death camps as well as the refugee. Monica Hesse went to great lengths to make sure details were correct and that kind of made reading it worse. I wish that none of that had happened. Especially the last chapter before the epilogue. Let me just warn you right now, a whole freaking box of kleenex. Like all of it. They Went Left touches mainly on the immediate aftermath of WWII, the going back home and trying to rebuild. Throughout the book, however, the characters never speak about those tattoos or really much of anything that happened during the war. It’s all about trying to move forward.

The characters were amazingly portrayed and the PTSD signs that were exhibited were just wow. I mean it’s one of the best books I’ve read this year. If you are a history buff, I fully recommend this one. It is fictional but at times you completely forget that part. The imagery and emotions were so raw and real and at times uplifting. I absolutely loved it.

Let me know what you think!

Raquel is a 20 something reader that longs to travel the world and act out her favorite scenes from her favorite books. Anything that involves another world, she loves. Raquel is a huge geek and nerd with Star Wars memorabilia battling it out for space with her bookish items. View all posts by Raquel

3 thoughts on “They Went Left by Monica Hesse”

This site uses Akismet to reduce spam. Learn how your comment data is processed. 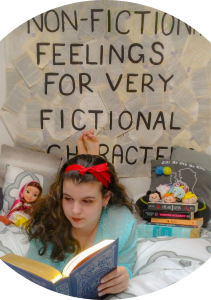 Hello! I’m Raquel. I love to read more than anything. I read mainly YA, NA and General Adult fiction with some of the spicier ones mixed in.

Check out my store! It sells scrunchies and headbands of all kinds!

I'm not on Goodreads as much anymore. I'm on Storygraph.

If you click on the image, you can see the entire schedule!

I’m not currently involved in any blog tours as I’m trying to catch up on ARCs I’ve put to the wayside. The photos below are the reviews that are upcoming in order of their appearance this year.